Below is a comparison between RTX 2060, RTX 2060 SUPER, and RTX 2060 12GB cards based on their specifications, performance, pricing, power consumption, and features.

When it comes to features then all these cards share the same feature set. All of them support DirectX 12, OpenGL 4.6, Vulkan, OpenCL, Real-Time Ray Tracing, Deep Learning Super Sampling (DLSS), Nvidia G-Sync, and come with new NVIDIA Encoder (NVENC) for better performance in online streaming, video editing, and encoding. Also, all are VR Ready cards and do not support SLI for multi-GPU setup.

The launch price of RTX 3060 was 349 USD while that of RTX 2060 SUPER was 399 USD for the Founders Edition versions. There is no Founders Edition RTX 2060 12GB card and only custom models will be available from various AIB partners or graphics card manufacturers. You can check the current prices of these cards for various AIBs from the links given below.

Here are the gaming benchmarks of these cards at 1080p resolution. 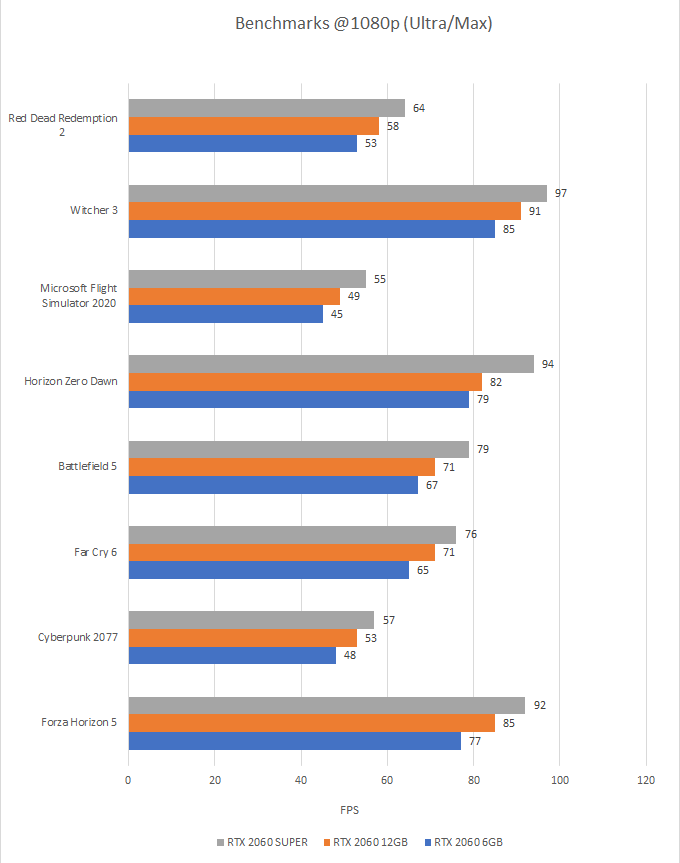 The RTX 2060 12GB is quite an interesting card that we don’t think it stands out on its own. It is almost an RTX 2060 SUPER with an extra 4GB memory but with reduced memory bandwidth and a slightly higher power consumption figure. The extra 4GB VRAM is not going to be that useful because for 1080p gaming or even some 1440p gaming, a faster 8GB VRAM of RTX 2060 SUPER has enough video memory that is faster too. Also, even with the same amount of CUDA Cores, RT Cores, and Tensor Cores, the RTX 2060 12GB is a bit slower than RTX 2060 SUPER. In my opinion, RTX 2060 12GB is definitely not an RTX 2060 SUPER alternative and is only a botched-up RTX 2060. If you have any opinions or queries regarding the topic then do let me know in the comment box below

Feel free to browse our selection of great review posts